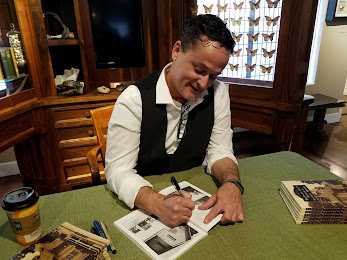 “Not every hero lives in a mansion or works from a smoky, hard-boiled office. Enter Barker, a mysterious man with no memory of his past. Ferociously handsome and acutely observant, Barker makes his home under the soggy planks of Old Fisherman's Wharf along California's foggy Central Coast. His closest friends are an assortment of stray dogs, ranging from a large Rottweiler to a tiny Shih-Tzu, who live with him. Adventure and intrigue have an uncanny knack for crossing Barker's path.” –Synopsis for Monterey Noir.

This month, we profile western fiction and non-fiction author, Patrick Whitehurst, who’s the author of the fascinating Barker series. Proving the adage of writing what you know, the Barker series takes place on Patrick’s original stomping grounds, the famous and famously beautiful California coast. Nowadays he hangs his hat in Tucson, AZ.

15) Patrick, what occasioned your move from California to Arizona and how has it changed your focus in your writing?

California is a great state, but the idea of retiring there seemed a bit out of reach, so it was decided to move before retirement. I’d lived in Arizona in the past, but never in Tucson, so it was both a return to familiar terrain but with a new slant. Tucson has been hot, and dusty, but it’s also vibrant and alive with literary charm, which proved to a draw for me.

14) Let’s start with Barker, your series character. No one, least of all himself, knows where he came from or anything about his past. Yet he has a strong moral compass as well as a genius for criminal detection. Will we ever find out about his past in the third installment? 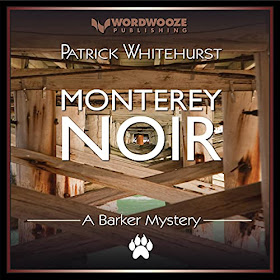 The third installment will spill a few beans about Barker’s past, but not the whole can. For me, the reveal is often disappointing compared to the mystery itself and wondering about a character’s past can be quite juicy. I’m undecided as to whether I’ll reveal all.

13) Barker seems to be a pre-ordained name considering his posse- a pack of wild but loyal dogs. How do they help Barker in solving his mysteries and are any of them based on dogs you own or have owned?

The dogs that accompany Barker each have their own superpower in a way, from Dangler’s muscle to Connor’s uncanny nose, and he utilizes them when needed. In some cases, they introduce him to the mystery as well. All of Barker’s dogs have been pets in my household at one time or another throughout my life and I love having them all together, happy, and busy, in the Barker world. In the third installment, coming soon, I introduce a new addition to the pack.

12) I know you’re a working writer but is there any such thing as a typical writing day for you? Do you draft in a notebook, laptop, or both? Do you set word goals and, if so, what are they?

I will occasionally jot notes in a notepad for a story if I’m out, but lately I simply open Gmail on my phone and type them up as an email to myself. Often, ideas will simmer in my head until I’m home. For me, if I get one page written a day, sometimes one a week, I count myself lucky. The day job, particularly lately, has prevented a writing hurricane. I’ve never set word goals, though I have worked on deadline for numerous books and that can also light a fire.

11) From having read the first book in the Barker series, Monterey Noir, I see that you seem to have written the book not in chapters but in virtually self-contained short stories. How and why did you come to write the Barker series like this?

I love the short story format and grew up reading Sherlock Holmes. Many of his exploits were told in that fashion but put together they tell a tale all their own. Originally, I wanted a series character akin to Holmes and Tarzan. If you can picture the two in modern times, and having a baby together, Barker would be that baby. It wasn’t until later I realized his tales go well in the novella format.

10) With the demands of a new job and a family, how do you juggle those things while still finding time for writing?

Writing is my passion, so I make time, just not with ease. There are days and weeks I am too exhausted to type. If possible, I edit at those times or simply read over something I’ve drafted. Other times I watch my favorite shows, read my favorite authors, and hope they’ll inspire me. They always do. When fully inspired, or on deadline, I make the demands of writing as important as the others.

9) When you were a boy growing up, who were some of your favorite authors and had any of them gone on to inspire or inform your work?

Encyclopedia Brown got me interested in detective fiction, which led to Sherlock Holmes. The latter is still an inspiration. Into my teen years I fell into the darker stuff like Clive Barker, Anne Rice, and James Herbert. They fed my love of horror, and the fusion of crime and horror that resulted.

8) You’d recently mentioned a horror novel you’d written in your 20s that Digital Parchment Press, your Barker publisher, is bringing out. Can you tell us about that?

I’m excited about that one. Berge Manor is a horror story written in first-person format by each member of the Berge family. They all live in a weird, huge house out in the woods and they’re all a bit whacked. It’s an odd, gory, weird-ass novel. After writing an initial draft in my 20s, I put it aside for a few years, then dusted it off and did rewrites, then put it away again. Now it’s hitting the world for better or worse. I am thrilled to see it. Should be out in kindle any day and in print format soon.

Formerly a pantser. A full tilt plotter now, though I do allow for creativity in the moment. But I like to know where I want to be at the end when I start at the beginning. I also tend to write out of order. 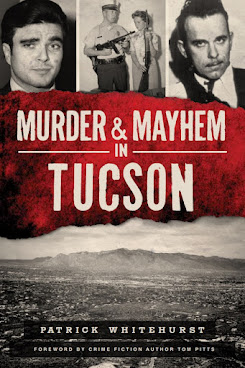 Depression era gangster John Dillinger tops the list when it comes to Tucson, as does Joe Bananas. The latter is part of the inspiration for the character of Michael Corleone in Mario Puzo’s book The Godfather. As luck would have it, Joe retired to the Tucson area. There are oodles of scary spots in Haunted Monterey County. For me, the haunted beaches were some of the more chilling locales. Imaging a wispy form on edge of the sea, shrouded in foggy mist, gives me the creeps.

5) Both of the Barker books are novellas told through short stories. Are there any plans to write a feature-length Barker novel?

I’m currently wrapping up the third Barker book, which will be a standalone story with no short stories. This one, as I’ve said, reveals a bit about Barker’s past and takes him out of his familiar surroundings of Monterey and into the heat of Sedona, Arizona. I’ve had fun playing with the two locales and the various characters found in both. I began the story years ago, then pushed it aside for other nonfiction and fiction projects. But now it’s his time. It feels awesome to get back into his head.

4) Your California fiction often references or is placed in locales made famous by past authors like John Steinbeck’s Salinas and Cannery Row and Robinson Jeffers’ Carmel. Do you ever refer to them for guidance or do you make use of your own native impressions?

I mention them in my writing here and there and love the west coast territory upon which these personalities walked. Jack Kerouac, for instance, is another author who spent time in the area. My character Sam the Thug is a huge Kerouac nerd. He’s often mentioned in my Sam tales. It adds a sense of literary history to any story and often connects with readers who, like the characters and like me, are hulking fans.

3) What are Barker’s strengths and weaknesses as a detective and what makes him such a compelling one?

Barker’s strengths would be his love of animals and his concern for the safety of others. He feels a need to involve himself in the well-being of his fellow man. Weaknesses might be that he’s often driven by a need for solitude, so much so that he isn’t terribly interested in finding out about his own past, which is a mystery to him as much as it is to the readers.

2) Why do you think California provides such fertile ground for crime fiction, especially murder mysteries?

California is its own country and offers inspiration for all sorts of inspiration, from surf noir, tech companies in the Bay Area, to Hollywood and Bigfoot; there’s something for everyone in that state. The possibilities are endless for crime fiction storytellers. Hollywood alone is a crime genre in and of itself.

1) What’s next for Patrick Whitehurst?

When Barker 3 is finished I plan to start a full-length crime/horror novel about the vampire subculture in Phoenix featuring my San Francisco-based character Sam the Thug. I’ve been outlining, plotting, and researching since last year so it’s damn near time I write something.

If you wish to know more about Mr. Whitehurst and his work, follow the handy links below:

He’s written three in the Images of America series too:

Author's page on Amazon, where you can see everything including short stories in anthologies:

Uranus Jokes free on Pulp Modern Flash my newest one is here: http://www.pulpmodernflash.com/2022/03/09/uranus-jokes-by-patrick-whitehurst/

Write on me, Sam free on Shotgun Honey here: https://www.shotgunhoney.com/fiction/write-on-me-sam-by-patrick-whitehurst/#more-20113